This is a game where two players recreate the folkloric story of Shamhat and Enkidu. It is a game of power, consent, knowledge, loyalty, and love. It uses a deck of cards to help narration.

In the old story, Enkidu is a wild man who has been freeing animals from traps set by hunters, destroying cattle pens, and leading wild animals close to civilization. He must be tamed in order to protect the people living in the valley. King Gilgamesh, a warlord, hearing these things, sends Shamhat, the sacred prostitute to tame the wild man. Shamhat and Enkidu spend two weeks together in the wilderness. When Shamhat returns, she relates to Gilgamesh that the wild man Enkidu has been tamed, and then returns to him, forsaking her life at the temple and living with Enkidu as a wife.

In the game one person will play Shamhat - the sacred prostitute, and the other will play Enkidu, the wildling. The game takes place over a series of interactions where Shmahat attempts to seduce Enkidu to lie with them. In doing so, politics and power will be revealed, and both characters will have to consent and understand what will happen if they do lie together. Underneath all this lies the simple fact: Shamhat and Enkidu are attracted to each other, in a way that neither of them can fully explain.

In order to download this Role Playing Game you must purchase it at or above the minimum price of $4 USD. You will get access to the following files:

Support this Role Playing Game at or above a special price point to receive something exclusive.

Each copy of Save/Serve purchased at the suggested price of $4 adds one copy to the community pool for those who can't afford one at the listed price.  These copies are also reserved for those of a marginalized community.

Save/Serve is a 4 page, two-player rpg about the romance between Enkidu and Shammat.

Shammat's goal is specifically to seduce Enkidu into hooking up, some explicit description is implied, and the game does not include comprehensive safety tools, so you may want to have some available---at least so that you can have a brake lever to pull if things go wrong. However, there are options to end the game non-canonically, with Shammat and Enkidu not hooking up, and there are some mini safety tools built into particular sections. Also, neither Shammat nor Enkidu has to be any particular gender.

Mechanically, Save/Serve is played with a deck of cards, which serve as conversation prompts. You play by talking and describing, and ultimately by following or diverting from the route the game expects you to travel.

Plotwise, a lot of Save/Serve is going to be what you bring to the table. Is Shammat a willing servant of Gilgamesh? Are they conflicted, knowing they're going to be inflicting mortality on a being? Does Enkidu know any of this? Are they even capable of guessing it?

Overall, if you like romantic rpgs, you like them a bit steamy, and you're interested in mythological settings, I'd recommend giving this a shot. Have x-card or lines and veils on standby, just in case, but otherwise it's a cool, very focused, character-centric piece about a seduction.

I had never heard of this myth before! Thank you for sharing it with us through this game, I love learning about these types of things. I greatly enjoyed the evolution of the "timeline" of the game and the options each character has at every pivotal point, because it could result in way different playthroughs, which is enhanced by the fact that there's no set amount of turns between one moment and another. My favourite part has to be the divine gift / human trait, and how the hidden/admired quality is mirrored between the two characters for obvious reasons, it was a very nice touch. I also enjoyed that what exactly constitutes as an intimate moment is left vague on purpose :) Great game! <3

The original myth has Shamhat taming Enkidu, who then goes to live with Gilgamesh in Ur, the city, after which he dies.

He dies much later!  It's misleading to suggest he dies after he goes to the city...

He gets in a big fight with King Gilgamesh (who defeats him) and after which they become friends.  They go on adventures together and do many great things.  When Enkidu dies, Gilgamesh goes on a final quest to discover the secrets of living forever, and possibly return his best friend Enkidu to life again.

I simply said "after which he dies," because I didn't want to go into detail when my main point was the divergence of this game from the part of the myth I did detail. However, good to see you know exactly where you diverged! 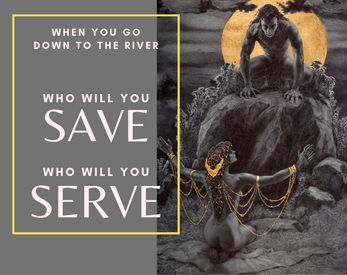