You look to the stars, to space, to the vast black that is so alive and on fire and not empty at all, because each brightling flame in the sky is still there, still full of life, the planets breathing in their tidal, ancestral orbits of systems and species. You look to the stars, Pilot, fighter, ‘riser, air-breather, light-seer, you who feel warmth and cold and loss and love, and you cry for them.

A storygame about a galaxy at the end of the war using Tarot cards to build plot, characters, relationships, and interactions.

This is a GM-less game for 1-4 players. You will create characters, bonds, stories, hopes, dreams, and even futures together, using Tarot cards and spreads to explore the galaxy. This is a game about a struggle past and a struggle present, but, as in many stories, there is always hope.

Characters will trade the Oculus as they play, allowing them to story build together, but also allow each player to narrate the story. There will be collaboration with the cards, with time allowed for revisions and suggestions of interpretations.

This game is best played in-person, with a communal tarot deck, and a common reference, which can be used or ignored as desired.

This game was written and designed in December of 2019 by Linda H. Codega for the #AdAstraJam hosted by KiennaS, deathbymage, and Dylan Grinder. You can find Linda on twitter @_linfinn, itch.io, and see their writing on their site.  If you find the price a burden, just follow Linda on twitter, send them a DM, and they will send you a copy for free!

In order to download this game you must purchase it at or above the minimum price of $6 USD. You will get access to the following files:

Support this game at or above a special price point to receive something exclusive.

Each copy of Stardrawn purchased at the suggested price of $10 adds one copy to the community pool for those who can't afford one at the listed price.  These copies are also reserved for those of a marginalized community.

I was wondering if you were planning on adding more community copies of this game? :) 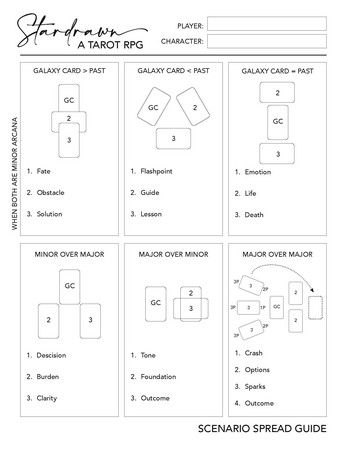 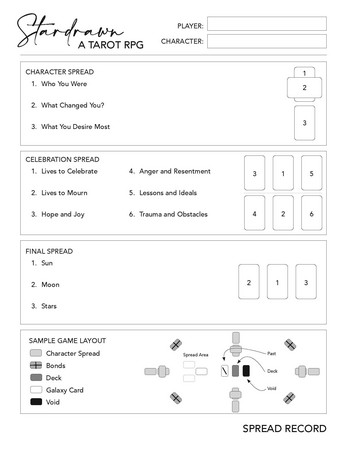